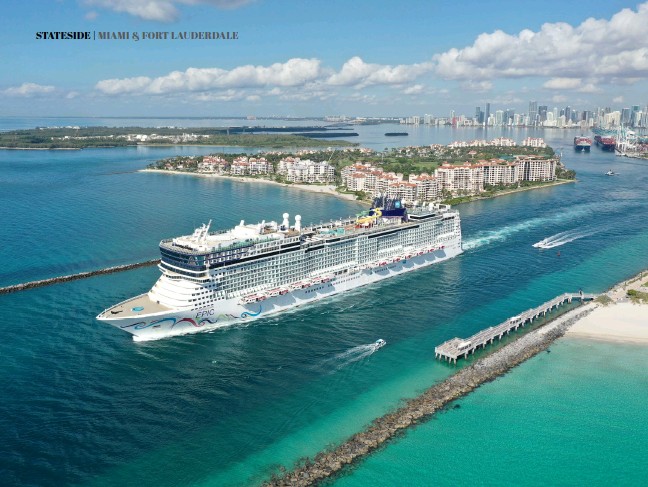 By the numbers, Miami truly ranks as the cruise capital of the world, a moniker it proudly touts. Simply put, Portmiami receives more cruise passengers than any other port on the planet, and Fort Lauderdale’s Port Everglades weighs in at a noteworthy third-busiest globally, itself. Before the pandemic slammed the industry worldwide in early 2020, Portmiami welcomed more than 6.8 million cruisers throughout 2019 … but the challenge of being on top, of course, is staying on top. Suzie Sponder, senior director of communications, Greater Miami Convention & Visitors Bureau, doesn’t think that’s a problem for Miami, even post-pandemic. “New developments at Portmiami will only ensure its continued status,” Sponder said, and those developments are numerous. Earlier this year, Virgin Voyages opened its brand-new Terminal V at Portmiami, and November will see the unveiling of Norwegian’s Pearl of Miami (Terminal B), as well as the big reveal of Carnival Cruise Line’s renovations at Terminal F. Perhaps most exciting for the city’s famed port, MSC Cruises already broke ground on its new terminal, AA/ AAA, in March, and Sponder said the $300 million project expects to introduce the largest cruise ship terminal in the world at its completion in fall 2023. With all these new facilities come plenty of new ships, too, and 2022 alone promises at least three new major arrivals at Portmiami by year’s end. Earlier this summer Disney Dream relocated from Port Canaveral to its new home base in Miami, bringing up to 4,000 passengers for each of its 100-plus annual sailings to Castaway Cay in The Bahamas. It’s scheduled to move to Port Everglades in November 2023, by which time Disney plans to complete its overhaul of Terminal 4. This fall Portmiami also welcomes Valiant Lady from Virgin Voyages and the behemoth Carnival Celebration, with capacity for a whopping 5,374 guests pouring into the city with each sailing. Fort Lauderdale will bring in new business, as well; from Celebrity’s sprawling Terminal 25 at Port Everglades, the line’s newest ship, Ascent, will make her maiden voyage in December 2023. To support the influx of new visitors adding to the crush of cruisers already passing through this sailing hot spot annually, Sponder said a host of new hotels are opening in the vicinity of Portmiami through 2022 and beyond. YOTELPAD Miami opened a combination hotel and condo tower in June, and citizenm Miami World Center debuts this month with 351 app-controlled bedrooms, similar to the 252 smart rooms already opened in August at sister property citizenm Miami Brickell Hotel. From Intercontinental Hotels Group, Atwell Suites, a new IHG brand, will open in Downtown Miami in November, and Hyatt begins two new builds in 2022 with Thompson South Beach and Grand Hyatt Miami Beach Convention Center Hotel, adding 800 rooms alone. Looking ahead, the city expects a new Moxy in 2023, and Baccarat and Virgin have properties currently scheduled for 2025 openings, as does Treehouse, which plans to make its U.S. debut in Miami the same year. Fort Lauderdale, too, racked up thousands of new rooms, with recent openings including hotels from avid, Four Seasons, Hilton, Kimpton, Marriott, AC, Courtyard and Cambria. As it seeks to meet the surge of pent-up demand from nearly two years of empty seas, the cruise industry continues to count on the expertise and dominance of Miami and Fort Lauderdale, and the region stands ready. SCENIC DRIVES If you’re only in town briefly, pre- or post-cruise, drive down Miami Beach’s Ocean Drive for a quick immersion tour of the city’s most iconic offerings. You won’t often move quickly along this mile-and-a-quarter stretch, and it may inspire you to make plenty of stops for snacks and snaps, so it’s easy to make a true road trip-style drive of this picturesque path. You’ll spot as much Art Deco and pastel-painted architecture as you could possibly desire to the west, while the ocean often glitters to the east. A hotbed of sportscar afficionados, Miami Beach is certainly not known for its law-abiding drivers, though, and pedestrians and bicyclists only complicate journeys through its busier neighborhoods. For a somewhat less obstacle-laden afternoon, consider Old Cutler Road in charming Coral Gables, where you’ll find nearly 15 miles of scenic driving passing through desirable neighborhoods like Pine Crest and Palmetto Bay. The highlights of this route are the road’s famous tree tunnels of mesmerizing old banyan trees. Of course, if you prefer to stick to the ocean theme of your cruise adventure, why not take a scenic boat drive instead? Poseidon Ferry offers a 75-minute scenic skyline cruise that departs from the ferry dock on the Miami River Bay Walk. It also operates a commuter ferry service to and from key neighborhoods like Miami, Miami Beach and Coconut Grove locally, and even Bimini and Nassau in The Bahamas, just a few hours away.